View source
watch 02:40
World of Warcraft: Dragonflight - The Loop
Do you like this video?
Play Sound

Gear are equippable items in Injustice: Gods Among Us Mobile. They can be added to your characters to increase attributes such as damage, power generation, and maximum health. In addition, they may have other effects such as disabling specials, power drain, chance to stun, Invulnerability, and either increase Crit chance or Crit damage. Gears come in five rarities, ranging from Common to Legendary.

Along with passive, gear is the most impactful factor in battle, and a well-equipped team can beat much stronger enemies with superior stats. Because of that, utilizing gear is very important, especially in Online Battle and Survivor Mode where enemies can be equipped with various powerful gear.

Each character can equip up to 3 pieces of gear. The same piece of gear cannot be equipped more than once on the same character and two different characters cannot have the same piece of gear, but gear can be removed any time without cost. A minimum level of 5 is required to equip gear. The first gear slot is unlocked for free. The second and third slots can be unlocked for 20,000 and 40,000 Power Credits (this has to be done once for each character).

Gear pieces have a gear score ranging from 3 to 150. As a character can equip up to 3 pieces of gear, the maximum gear score is 450. This stat will not affect multiplayer match-ups.

All gears are rewarded in their unevolved forms.

In Online Battle, gears are some of the rewards for each season, variable in rarity depending on your ranking. Survivor Mode may also reward gears from 1 to 4 star (including exclusive Gear Sets). Gear could also be collected from Gear Locker in the store, giving 3 pieces for 65,000 credits and with a chance to obtain the Ra's Al Ghul's Dagger. All of the Nth Metal packs do contain gears, and both Pro and Ultimate packs may drop even Online Battle and Survivor Mode legendary gears in their unevolved forms. Some other packs also contain gears, but they cost real money to purchase.

The "number owned" on the gear interface can only show a maximum of 99. However, it is possible to have over 99 pieces of the same gear, and they can be shattered as normal.

There is a good deal of confusion regarding this system, as, for example, 3-star gear that is evolved (e.g. the original character-specific gear pieces) would have 4 stars, same as an unevolved gear earned from Online Battle season rewards. Players seem split on whether they should refer to a piece of gear by their evolved or unevolved form. Bizarrely, it appears that it is more popular to refer to 3/4-star gear as 3-star, while 4/5-star gear as 5-star. The slash (/) may be used, but could also be confused as referring to two groups of gears in an "or" relationship.

3/4-star gear (e.g. Alloy Sword/Promethium Longsword, which has one of its effects only affecting Deathstroke) are often referred to as signature ("sig") gear or character-specific gear. Some characters such as Batman have multiple signature gears, even legendary ones.

For the purpose of this wiki, the evolved version will generally be used to refer to gear. 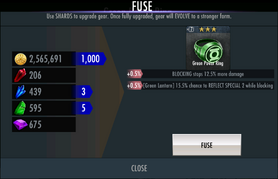 Fusing gear improves them at a cost of shards and Power Credits.

Gear can have a rarity value of one (common) to five (legendary) stars. Once evolved, the piece of gear move up a tier and one star is added. Gears gain additional effects when evolved. Each gear can only be evolved once. Unevolved gears have a dull blue header and evolved ones have a gold one. The exceptions are Gear Sets from Survivor, which have purple headers when unevolved and gold when evolved.

Gear can be shattered to obtain shards. This will destroy one copy of gear per shatter. Upgrading gear will increase the amounts of shards obtained from shattering further duplicates, making them a large one-time investment that would eventually make the cost less than what you gained from the shattering.

Community content is available under CC-BY-SA unless otherwise noted.
Advertisement