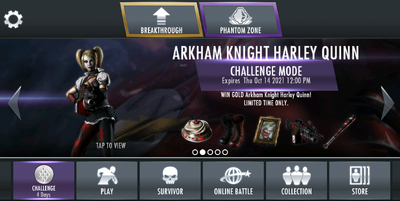 A Challenge or Challenge Mode is a regularly held event that usually starts on Thursday and lasts around two weeks (shorter for repeats, generally a week), in which players must beat 63 (repeatable for two further times at increasing difficulty for 189 total, which includes Expert and Nightmare mode) battles within that time for various prizes, but they are most well-known for unlocking challenge characters, which are the main source of new and more powerful characters for every player's roster. Batgirl is the first known challenge character. Challenges may be repeated, which used to be rare but has since become the norm.

Each challenge has five challenge battles; challenge battle 1 to 4 has 12 fights and 5 has 15, including a boss fight against the challenge's unique character. Challenge battles can be done alongside Standard Battle without resetting progress. They can be done in any order, you don't need to complete a battle to work on another, although you still need to beat the matches in order.

However, this was changed as of the 2.11 update, and ONLY happened for the Challenges for the Suicide Squad characters and all of their repeats; the Standard difficulty contained only 9 battles each, with no characters requirements, except for the Bronze and Silver tiers, which are tier 1 and 2. Additionally, prizes for completing tiers have been improved (a Silver Booster Pack, Gear Locker, and Gold Booster Pack, respectively). Upon completing the Standard difficulty, it will be changed back to normal, except for the prizes. After the challenges (and the repeats as well), Raven/Teen Titans's challenge began and Challenge Mode was reverted back to its original way (though still without Challenge Credits). Challenge of Lobo/Bounty Hunter also has reduced amount of fight in the Standard difficulty, but still requires specific characters.

It is possible to simply pay Power Credits to skip battles. The price is high however, so try to avoid unnecessarily spending credits during the challenge, as players may be forced to skip some battles they are unable to beat.

Previously, battle 2 requires a random character just like battle 4 and 5 and battle 3 only allows bronze and silver characters, but this is switched around in the Martian Manhunter/Blackest Night challenge. The energy cost was unchanged, however: battle 2 still only consumes 1 bar of energy each while battle 3 consumes 2. This was changed back in Hal Jordan/Red Lantern's challenge.

Starting with the Blackest Night Martian Manhunter challenge, there would be a single match in the challenge that awards an unrelated gold card. It was Darkseid for this case, followed by Batman/Beyond Animated during the Hal Jordan/Red Lantern challenge; however, it was changed during and after Catwoman/Arkham Knight's challenge, so instead of a Gold card, you'll receive a Silver card instead.

Community content is available under CC-BY-SA unless otherwise noted.
Advertisement